Types of drones and how drones work, a complete case study on drones.

In 2020 drones are getting popular day by day. Choosing the right type of drones becomes difficult. So, in this blog, we will discuss drones. 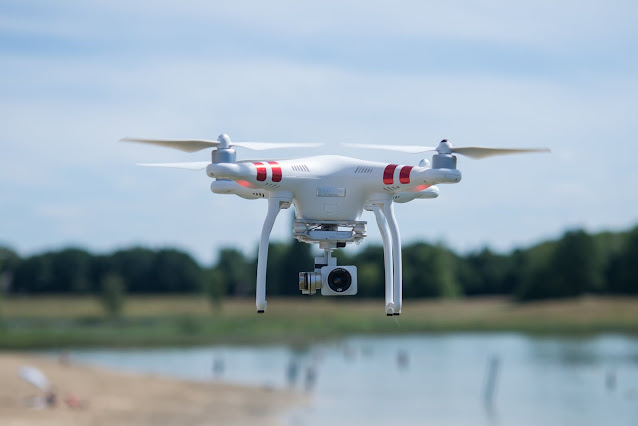 Topic cover in this blog:


What is drone technology?

A drone is an unmanned aerial vehicle (UAV) that can be made to fly automatically by a dedicated remote unit. It can perform a certain operation in the air as programed by a computer.
The origin of drones assigns to the need of government and military but with the advancement of technology, drones were later designed to use in different commercial projects.
It is now used in different fields such as finding missing people, wildlife conservation, weather forecasting, traffic monitoring, firefighting, agriculture, creating 3D models, photography, video making, academy projects etc.

The 3 Main Categories of Drones and Their Advantages and Disadvantages

A fixed-wing drone consists of one fixed-wing and is designed in such a way that it looks and works like an airplane. What helps differentiate fixed-wing drones from other types of drones is that they cannot stay in one place with a vertical lift rotor, but instead glide on a set path as long as their energy permits. This means they will be much more efficient compared to the 2 other main categories of drones.

Fixed-wing drones (UAVs) are well known in the military, as they are frequently used when the manned flight is considered too risky or difficult. They are also used in the commercial industry.

Fixed-wing drones are more data-focused in design and they are usually used for commercial purposes such as aerial mapping, inspection, agriculture, construction, security, and surveillance.

Single rotor drones are generally strong and look similar in structure and design to an actual helicopter. They have one big rotor, which is like one big spinning wing, plus a small-sized rotor on the tail for direction and stability.

The most popular type of drone for getting the best footage is the multi-rotor drone. This is the popular choice for aerial photography, movie making and surveillance. It is used by professionals because of its small size and ready to fly out of the box capabilities. 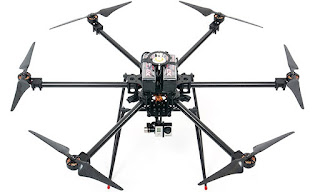 Multi-rotor drones also are the easiest to manufacture and the cheapest drone option. They carry several rotors on their body and maybe further classified based on the number of them on the platform of the drone. There are tricopters (3 rotors), quadcopters (4 rotors), hexacopters (6 rotors), and octocopters (8 rotors), among others. Quadcopters are by far the most popular multi-rotor drones.

Check out this video for more information on types of drones.

You can further, categorize within the three main categories of drones:

Most endurance drones can be controlled up to 400 miles and be up in the air for up to three consecutive days. These are typically used for surveillance and collection of scientific data.

A typical unmanned aircraft is made of light composite materials to reduce weight and increase stability. This material strength allows military drones to cruise at extremely high altitudes.
UAV drones are equipped with different types of technology such as infrared cameras, GPS, and laser (consumer, commercial, and military UAV). Drones are controlled by remote ground control systems (GSC) and are also referred to as a ground cockpit.
An unmanned aerial vehicle system has two parts, the drone itself and the control system.

The nose of the unmanned aerial vehicle is where all the sensors and navigational systems are present. The rest of the body is filled with drone technology systems since there is no space required to accommodate humans.
The engineering materials used to build the drone are highly complex designed to absorb vibration, which decreases the sound produced. These materials are very lightweight.

You can read also

Different type of technology use in drones:

These are unmanned aircraft and have the power to take off, ﬂy, hover and land vertically. The exact meaning of VTOL is “Vertical Take-Off and Landing”. A typical VTOL UAV may be based around a helicopter design that consists of four or more propellers.
A few of the latest small UAV drones like the DJI Mavic Air and DJI Spark take VTOL to the next level and can be launched from the palm of your hand.

Drones can ﬂy in both GNSS and non-satellite modes.  For instance, DJI drones can ﬂy in P-Mode (GPS & GLONASS) or ATTI mode, which doesn’t use GPS.
Highly accurate drone navigation is extremely important when ﬂying, especially in drone applications such as creating 3D maps, surveying landscape and SAR (Search & Rescue) missions.

When the quadcopter is ﬁrst switched on, it searches and detects GNSS satellites. High-end GNSS systems use Satellite Constellation technology. Basically, a satellite constellation may be a group of satellites working together giving coordinated coverage and are synchronized, in order that they overlap well in coverage. Pass or coverage is that the period during which a satellite is visible above the local horizon.

The latest high-tech drones are now equipped with collision avoidance systems. These use obstacle detection sensors to scan the surroundings, while software algorithms and SLAM technology produce the picture into 3D maps allowing the drone to sense and avoid.  These systems fuse one or more of the following sensors to sense and avoid.

Gyro stabilization technology gives the UAV drone its smooth ﬂight capabilities.
The gyroscope works almost instantly to the forces moving against the drone, keeping it ﬂying very smoothly.  The gyroscope provides essential navigational information to the central ﬂight controller.
The inertial measurement unit (IMU) works by detecting the current rate of acceleration using one or more accelerometers. The IMU detects changes in the rotational property like pitch, roll, and deviates erratically from a set course using one or more gyroscopes.  Some IMU includes a magnetometer to assist with calibration against orientation drift.

These are the drone technology, which moves the UAV into the air and to ﬂy in any direction. On a quadcopter, the motors and propellers work in pairs with 2 motors.


They receive data from the ﬂight controller and therefore the electronic speed controllers (ESC) on the drone motor direction to either ﬂy or hover. Onscreen Real-Time Flight Parameters.
Nearly all drones have a Ground Station Controller (GSC) or a smartphone app, allowing you to ﬂy the drone and to keep track of the current ﬂight telemetry (UAV range, height, speed, GNSS strength). Many UAV drone ground controllers use FPV (First Person View), which transmit the video from the drone to the controller or mobile device.

In 2016, a new live video, which transmits over the 4G / LTE network, providing an unlimited range and low latency video were announced. This drone technology was released on the Sky Drone FPV 2 and comprises of a camera module, a data module and a 4G / LTE modem, Firmware, and Flight Assistant Port.

The ﬂight system communicates with a PC Assistant through a micro-USB cable. This allows the conﬁguration of the UAV and to upgrade the drone ﬁrmware.
A very simple description of a UAV drone is that it is a ﬂying computer with a camera or sensor attached. Like computers, drones have ﬁrmware software, which sends commands to the physical components in the aircraft or remote controller.

Drone manufacturers release ﬁrmware upgrades to ﬁx bugs and add new features to the aircraft, remote unit, or software if it is used to ﬂy the drone.

On the DJI Phantom 3, the wireless communication device uses the 5.8 GHz, frequency band. Remote control systems are also known as ground control. The drone and the ground control should already be paired when it leaves the factory.
Almost, all the newest drones can use 2.4 or 5.8 GHz operating frequencies.

Range extender UAV technology is a wireless communication device that generally operates near about 2.4 GHz frequency. It is used to extend the range between the smartphone and the drone in an open space area.
It has a transmission distance of up to 700 meters. Each range extender has a unique MAC address and network name (SSID).
The latest DJI drones out of the box can ﬂy with a range of up to 5 miles (8 km).

Most of the UAV drones today can be ﬂown by a remote controller or from a smartphone app, which can be downloaded from Google Play or the Apple Store. The app allows for full control of the drone.

Each manufacturer will have its own app like the Go 4 app from DJI.
However, the latest 4k video drones such as DJI Mavic series, DJI Inspire 1, Phantom 3 Professional and Phantom 4 have a camera that is speciﬁcally designed for aerial ﬁlming and photography.

The Inspire 2 is used by Hollywood producers. In fact, the Inspire 2 ﬁlmed all aerial and ground shots in a short ﬁlm called The Circle with cinematic quality.

How will drones affect the future?

Drones will transform our lives. Hundreds if not thousands of drones will fly above the towns and cities. The drone revolution will change the way in which logistics and transportation work now. But every good technology has a dark side. It may be a threat to the privacy of common people.

if you want to know about drone laws in India then check out this video.

READ: How games earn money, a complete case study on the gaming industry.